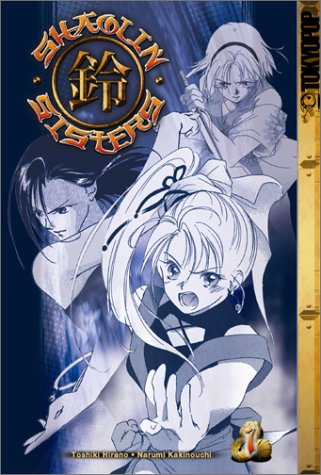 Dialogue and Development: 3 – quick development that could have been stretched over the first two books, to give more history of the characters.

“Juline Kenga’s life changes suddenly when the school she was living at is attacked, leaving only her alive. As his final act, the kung-fu master gives her a small bell from her father, a missing powerful sorcerer. Now Juline must search for her two half sisters, each who possess their own special bells. She and her sisters must use the secret of the bells to find their father and defeat Bai Wang, a sorceress on a sacred mountain who wants the power of the bells for herself.” ~ AnimeNewsNetwork (ANN)

While browsing the local used bookstore for their fine collection of manga, this tentacle looked to break from its romantic comedy and harem-esque manga it finds itself consistently going back to by no fault of its own. It was looking for something different to break beyond the barriers of its comfort zone and expand into the universe of martial arts action manga. Something without too much top busting and cloths ripping fan service and something slightly focused on a good story with action.

While pursuing the aisles (yes, plural, it’s great to have manga supported locally nearby), a staff member came up to inquire if this tentacle needed assistance (sure enough, it did). Commenting on this middle-aged otaku’s shirt, the staff member proceeded to ask questions of interest to help narrow down the subject matter needed for choosing the proper material to start this exploration into action and adventure.

After narrowing down the selection, she recommended an easy read with a compelling storyline to start the travels. The choice was between the two: mecha or martial arts. As a martial arts film fanatic, we chose the later and proceeded through a few title before settling on the first volume of what could be a fun series: Shaolin Sisters.

The opening scenes feature Juline Kenga, martial artist and heir to a sacred martial arts clan. She is off on excursion to a nearby spring to bathe before a morning of training. The art in this section is standard to the classic semi-heavy lines of manga illustration, taking into consideration of the properly illuminated areas to offer a bit of early fan service in the first few pages. While we don’t mind the fan service, as it is a staple in all genres, it was a bit early and one should know it is the only part here in this first chapter that is presented. Hopefully, it doesn’t make a consistent appearance in the series, but it serves the purpose of getting the reader’s attention.

Minor rant over, we move on to find Juline being found by servant of the clan that was sent to answer a summons from the master. As it is in many stories of many young masters of the martial arts, she is late for an important training. Without much delay, she readies herself and rushes back to the training hall excited to begin practice.

It is during this time of her morning dip, that the old kung-fu master and all members of the clan are under assault of one of many antagonists, King Baiwon. Baiwon looks to collect three artifacts said to hold magical powers to aid his rule of the people. When Juline arrives, she finds everyone, but a few survivors, that have been outright slaughtered off panel. Including the injured and slowly dying master who then informs Juline of her past.

The master informs Juline of her past and that her father has left her a present. A single bell that is said to be infused with magical abilities. He tells her that it is one of three bells given to each of the owner’s daughters, and that she was one of these sisters. The dying master entrusts her with the bell and the knowledge that she now must find her two sisters, who each maintain similar bells.

In succession the manga moves pretty forward in her travels to find her sisters. When she gets closer to her first sister, Kaline in a nearby village, their bells ring out for each other. When Juline tells Kaline of her story, Kaline is hesitant but joins her in the quest to reunite the three bells. It fast forward even more quickly and we find the third and final sister with the last bell. When in close proximity, all three bells ring out with Juline telling her story. While Seiline, who is a pirate captain does not believe her two sisters and says they must prove their worth. The challenged has been accepted by Juline and will face the eldest sister Seiline in combat to prove her connection of a common father.

This is where the first volume of Shaolin Sisters ends, just before the family duel. Is this first volume interesting enough to continue the adventure into the next book? That’s a great question this tentacle is struggling with. It has potential to take off, but the fast introduction, development of character and story does not hold its attention. What can be said is that it is a jump into the action type of story and moves at a pace readers will like for a fighting manga. It should be a quick series to finish. Volume 2 currently sits on the nightstand but hasn’t been picked up yet. Maybe this weekend. Will everyone be kung-fu fighting?

Art: 3 – Standard. Good solid lines and proportions of the characters are not distracting. Nothing outlandish.

Story: 3 – It could be an interesting read, it just moves a little too quick for me.

Dialogue and Development: 3 – quick development that could have been stretched over the first two books, to give more history of the characters.